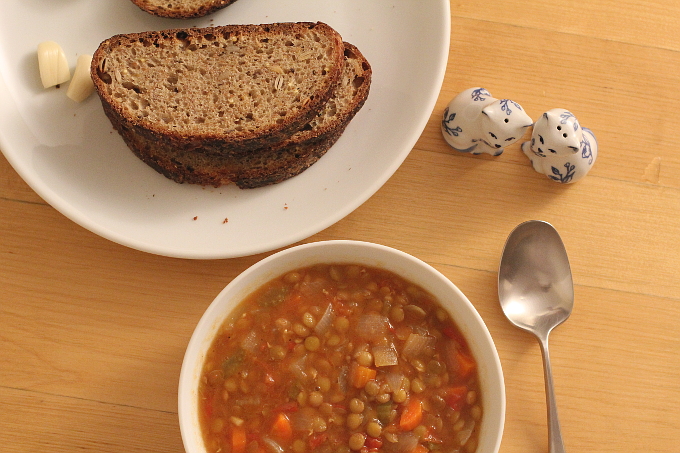 I’m on a roll – fifth post this month! Strange, considering I haven’t been around since October last year. Maybe it’s the new year, a good time to start fresh. It was also good to get back to our old routine after the holidays, and with E getting a little older, I’m able to find pockets of free time throughout the week.

So, lentil soup, one of our dinner regulars. It’s hearty and flavorful, without scrimping on nutrition. Great when you need a break from meat for a couple of days. The soup is easy to make, but there’s a bit of prep work because of the diced fresh tomatoes. I suppose you can use canned diced tomatoes as a shortcut. I cook three dinners worth plus E’s portions (she loves this soup!) to make up for the time cutting vegetables. To round out the meal – good bread, toasted and buttered (generously :D), and fresh garlic to add to the soup or to rub on the bread. 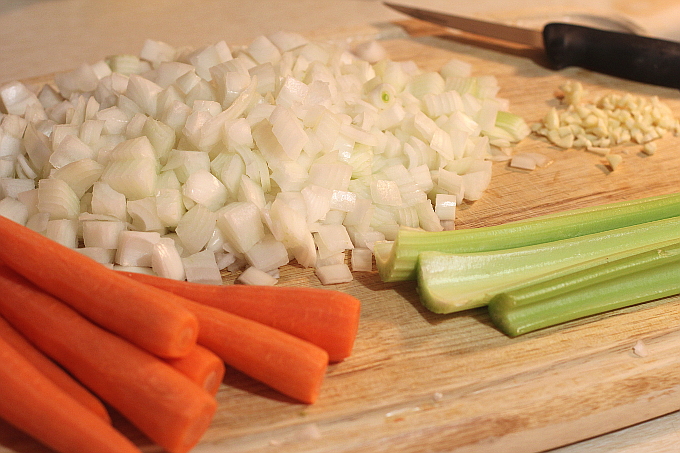 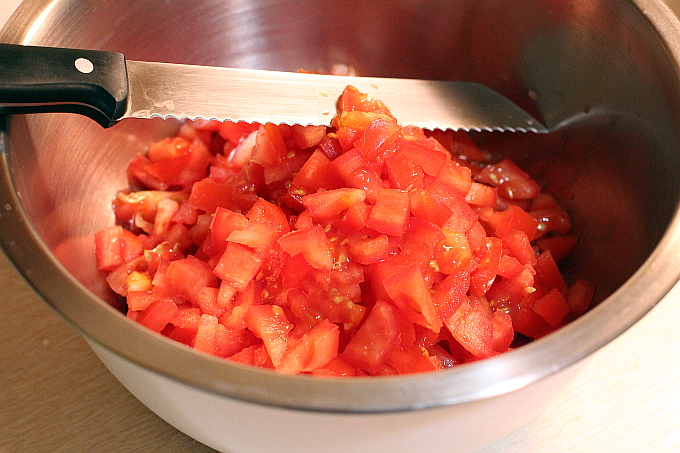 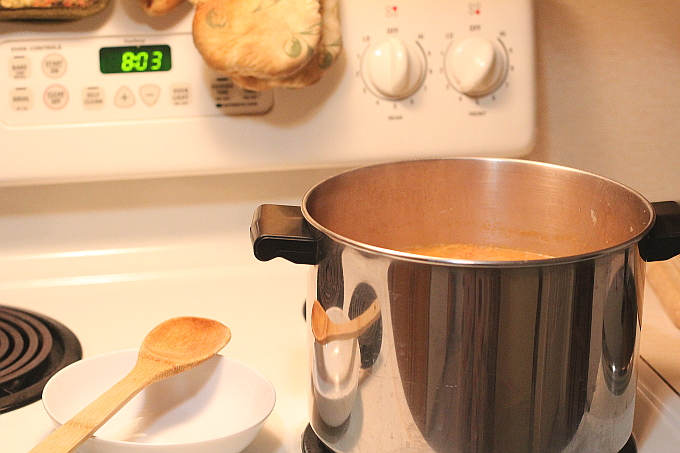 ** We’ve tried this soup using only water and still like it, but broth does make a difference.

– Heat olive oil in a large pot over medium heat. Add onion and garlic and cook for about 2 minutes.

– Add celery, carrots, salt, and pepper and cook, stirring occasionally, until vegetables have softened, about 8-10 minutes. (It’s a big pot of soup so I put a good amount of salt and pepper. But remember that it’s easier to add more later than to take it out.)

– Add washed lentils, tomatoes with juice, and liquid. Bring to a boil, then simmer for an hour. Add salt and pepper to taste. 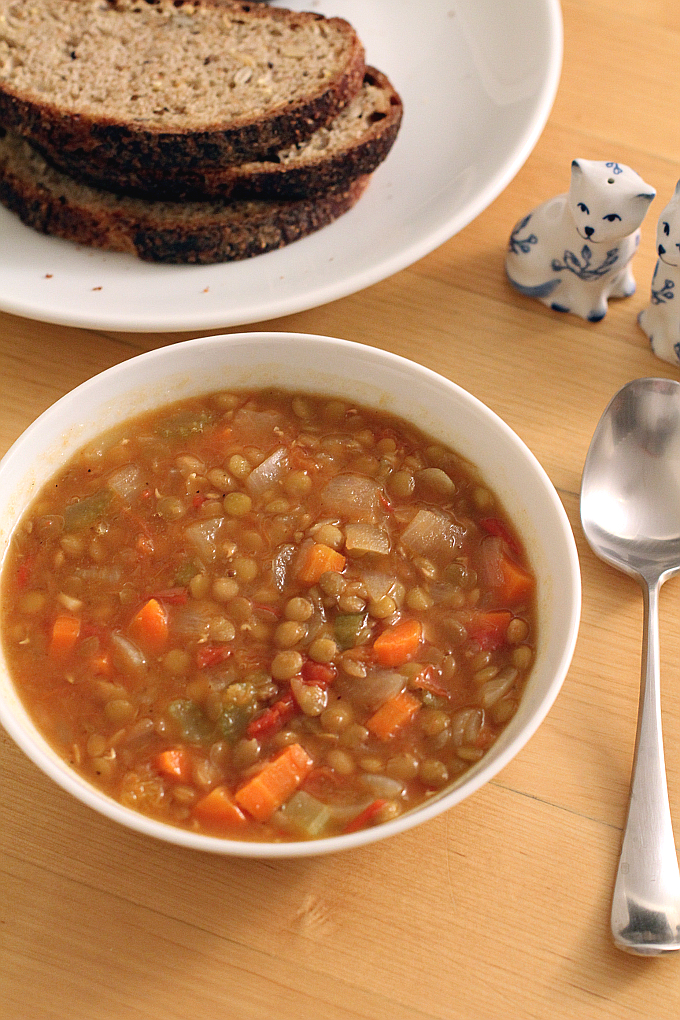 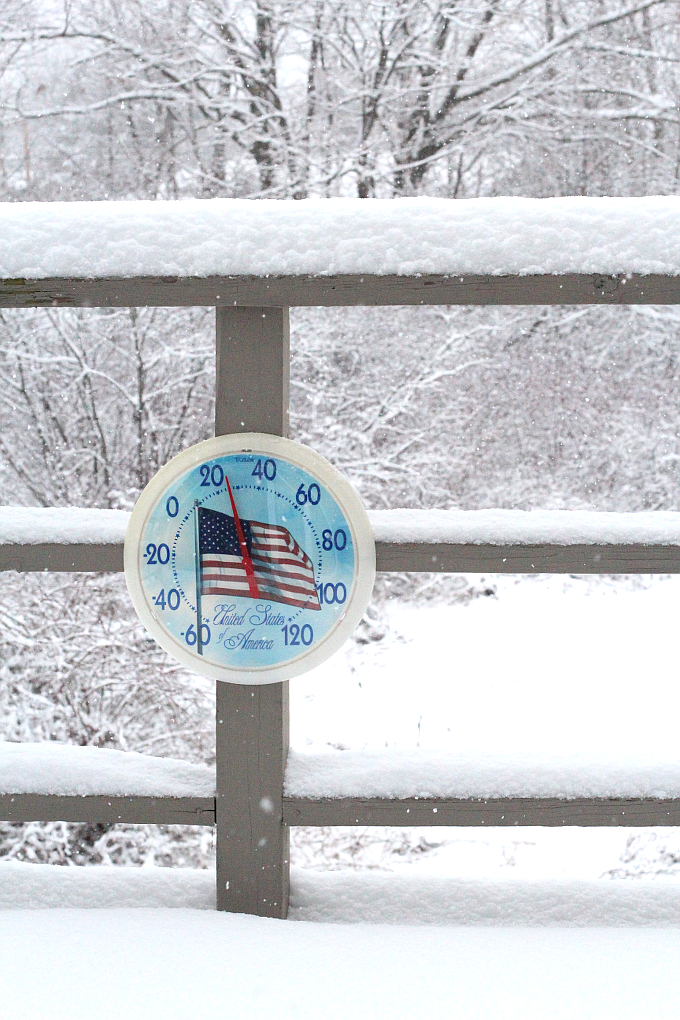 …we had snow, lots of errands, and little sleep. On the upside, there were pancakes and plenty of quality time with my babies. Can’t complain.

A blizzard will hit the northeast tomorrow. Stay warm and safe! 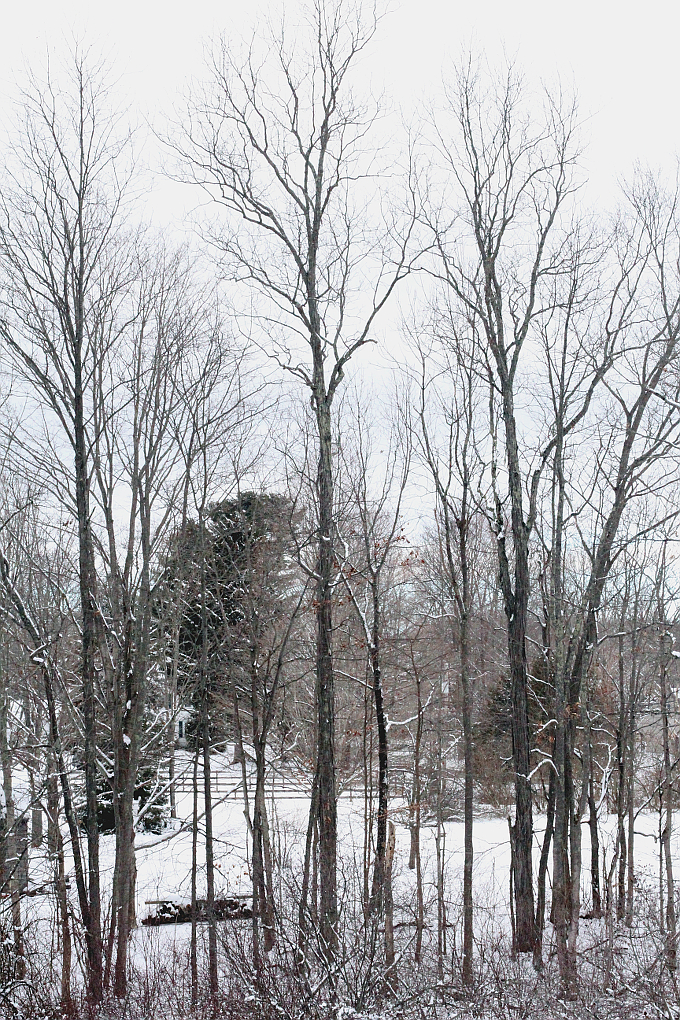 I got the baking bug last week, thus muffins were made. While looking for a recipe, I found myself reading up on cake and muffin basics that I’ve been meaning to look up. This blog post provides a good summary for cake basics and Google is your friend for more in-depth info.

I learned that a traditional butter cake typically has these ingredients – flour, sugar, eggs, fat, liquid, leavening, and flavor extracts. A quick guideline for ingredient ratios:

In comparison, muffins use more flour and liquid, and less sugar and fat. Cakes use the creaming method. With muffins, the dry and wet ingredients are mixed separately, then roughly mixed together. The differences in ingredient ratios and methods affect the texture (and taste) of the baked product. Muffins are usually drier and slightly denser than cakes. Cakes are desserts while muffins are a form of quick bread that can be sweet or savory.

With this new knowledge, I thought I’d try making my own recipe haha. I made two batches of orange cranberry muffins – 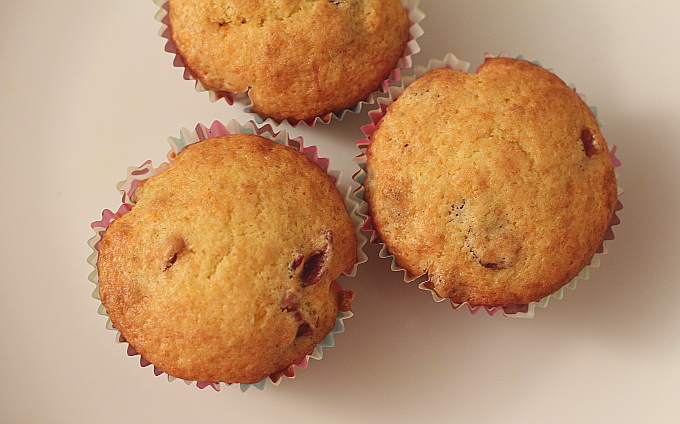 ** I soaked the dried cranberries in 1/2 cup of water with 1 tbsp. sugar for 1-2 hours on the counter. This rehydrated and plumped up the berries.

– Bake for 15-20 minutes, until a toothpick inserted comes out clean.

Results: Three things I made different: vegetable oil for version 1 vs. butter for version 2, and more juice and more zest in version 2. I ended up with more muffins in version 2. George prefers the first batch which came out crusty and more bready in texture. The muffins from the second batch were more like cupcakes, flatter and smoother at the top, more moist and has a softer texture. I have a slight preference for version 2 since I do love my cakes. In terms of flavor, there was no significant difference in taste. 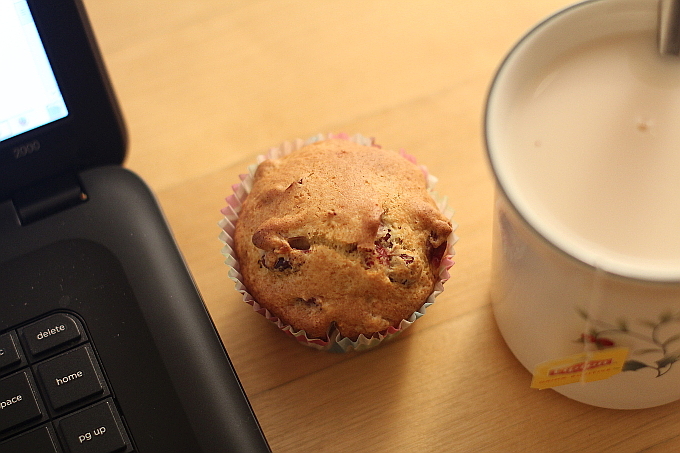 I enjoyed this little muffin experiment, the process and the results :) We shall have another one when the mood and inspiration strikes.

by Badly Drawn Boy, a soundtrack from the movie About A Boy. It’s about a suicide note from a mother to her son, quite grim, but it’s such a beautiful and moving song. 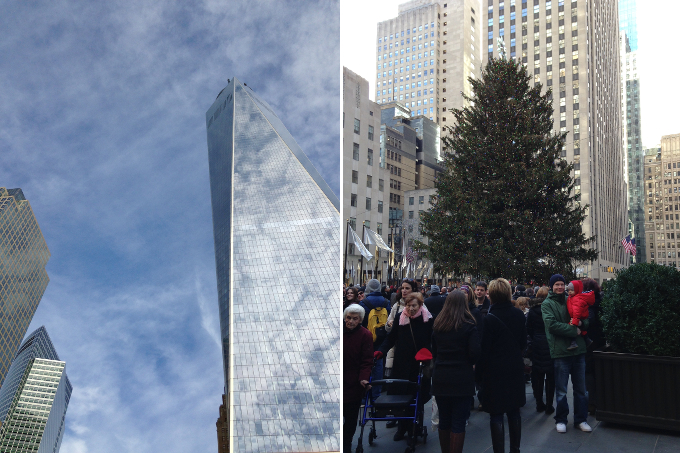